A deaf actor has become the first to step in for a principal actor at a major theatre, and has said that it doesn’t matter if the audience didn’t understand all of the sign language because “often you don’t understand everything in a Shakespeare play.” Charlotte Arrowsmith, a 39-year-old understudy, played Vincentia in the Taming of the Shrew at the Royal Shakespeare Company, in Stratford-upon-Avon, earlier this month and hopes more deaf actors will now be given the opportunity to perform alongside their hearing colleagues.

During the play, set in an 1590s England reimagined as a matriarchy, the rest of the cast incorporated some signs and gestures from British Sign Language (BSL)  into their performances, to help to integrate Ms Arrowsmith’s Vincentia into the scenes. The audience had no additional visual aids, such as closed captions, to help them understand the signing that was being used onstage and had to rely on what they could hear and see. But Ms Arrowsmith said she was told later that had made little difference to their enjoyment of the play. 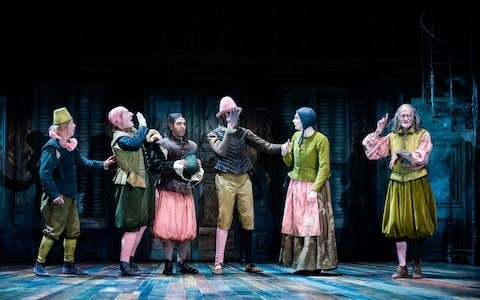 Ms Arrowsmith (second right) has become the first to step in for a principal actor at a major theatre
Credit: Ikin Yum Photography

She told The Telegraph: “The audience response has been great; they’ve said things like ‘It’s so visual’. They might not understand everything I’m signing but often you don’t understand everything in a Shakespeare play. It prompts thought and debate.  In the real world there is communication that is missed, just as there is on stage.

“It works well because I’m just a woman who happens to be deaf. It’s very smooth. There were some complications and challenges and naturally the whole communication piece wasn’t picture perfect, but everyone in the cast included extra gestures and some signs into their performance which showed they embraced the BSL and deaf culture to make it work as best we could.” The actor praised her fellow performers for the effort they put in as they integrated her into the preparation of the play and her eventual performance.  “It’s so fantastic to have the team working together and thinking about how each person can be part of the process. The hearing cast have had such an open mind and hopefully we can open more minds,” she said.

“In Taming of the Shrew, Vincentia is a hearing woman and we needed to make changes for her to be portrayed convincingly by a deaf actor. We have to show how the other cast mates come to understand Vincentia and how she interacts with hearing characters.” Ms Arrowsmith said she took the inspiration for her portrayal of Vincentia from Princess Alice, the mother of Prince Phillip, who was deaf.  “She taught herself many languages and was a strong and determined woman. I used this persona to empower ‘Vincentia’,” she said.

“I’m not the only deaf actor. There’s lots of skilled ones out there, but they need to be seen and encouraged and I hope what I’m doing will open up opportunities for others. It shows that nothing is impossible if we try as a team, and with more time it shows how much a mainstream cast can bring together BSL and diversity into the mix.”   The RSC said: “Not only is this an RSC first, but we believe it to be a first at any major theatre.” The Taming of the Shrew plays in Stratford until August 31 before going on tour.