Many of you may confuse his name with his brother, Greg Hlibok, who was one of the instrumental leaders of the Deaf President Now movement at Gallaudet University in March 1988. However, his brother, Bruce Hlibok, was very successful in the theatre field.  He is one of the few known Deaf individuals to earn a MFA (Playwriting) from NYU located in New York City.  Bruce developed 12 plays during his lifetime and is the first known individual Deaf actor to appear on Broadway in the production of Runaways in 1978.

He founded his own theatre in NYC called Handstone Theatre and was active in Deaf Theatre until his death in 1995. Below are two links to a short bio about his life and also content background of the play from the Wikipedia site.

In lieu of a photo I have included a link to YouTube where there is a 4 ½ minute segment from the play. You will see Bruce signing at about the 1:25 mark of the video.

Watch for more information on Bruce in the “Who’s Who section of the website in the near future. 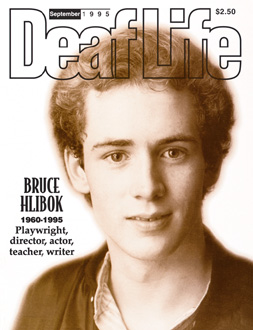