AUDITIONS: “One Flew Over the Cuckoo’s Nest”

AUDITIONS: “One Flew Over the Cuckoo’s Nest”

Director Willy Conley of the Theatre and Dance program will be holding auditions for its fall 2019 production of ”One Flew Over the Cuckoo’s Nest,” a stage adaptation of Ken Kesey’s novel.

For many years up until the 1970s, deaf people were occasionally misdiagnosed as being mental ill or retarded. Unfortunately, some of them ended up being sent to mental institutions, which sometimes led to severe consequences. This is the frame from which the Gallaudet Theatre and Dance program will set One Flew Over the Cuckoo’s Nest. It is a story told from the point of view of a Deaf Native American man institutionalized in one of the last mental hospital holdouts deep in the Pacific Northwest that practiced barbaric treatments no longer in use today. The play centers around one of the hospital’s day wards run with factory-like efficiency by an iron-fisted nurse. She provides therapy and controls a group of hapless patients into mindless conformity…except for one new, free-spirited arrival who figures out how to throw a wrench in the works.

Looking for actors over the age of 18, of all types, sizes, races, abilities, and orientations. For the audition, come prepared to show one minute of your nonverbal, realistic characterization of a patient in a mental hospital. You may be given a short excerpt from the play to sign in ASL. 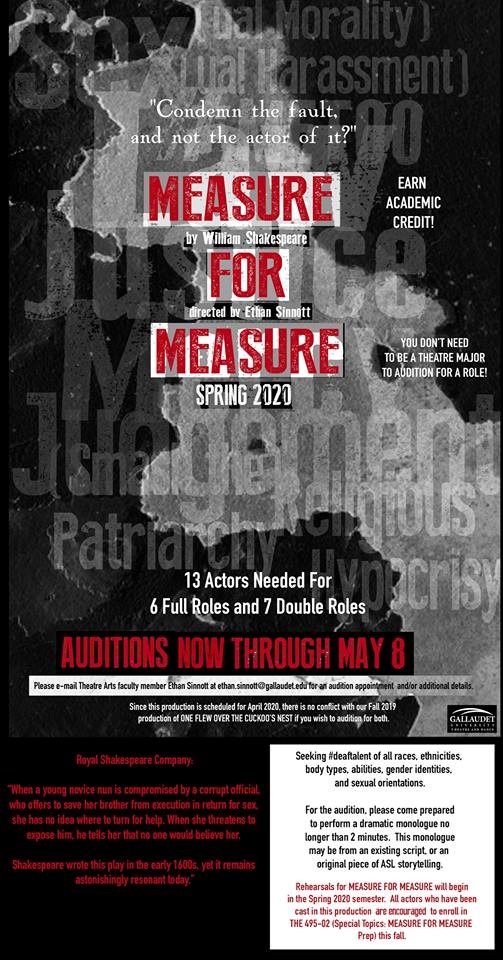 For the 2020 spring semester Ethan Sinnott will be directing a production of “Measure for Measure” and you can contact him by email for an audition time or to get other details concerning the production at: